Want results like these?  Commit to fit now and join my next challenge group!

Q:What if I can’t afford the challenge pack for the program I am interested in?

A:There are many other affordable Beachbody programs available (as low as $40) and you will be allowed to join this challenge with the purchase of ANY program (so long as you fully commit to following it each day).

Q:Do I need to use a Beachbody Program to commit to the challenge?

A:For this challenge, no, you will not need to follow a specific program.  If you chose not to follow the program it is recommended that you sign-up for a month supply of Shakeology.

Q:What will my workout program be if I chose not to do a Beachbody program.

A:This is fully up to you!!  You just need to commit to putting in a 30-60 minute workout every day where a workout is required (and drink your Shakeology).

Q:What Beachbody Program is right for me?

A:If you have questions regarding which program to choose please contact me directly and we will work on finding something that is suitable to your goals and current fitness level.

Q:Is there a way I can save on the Beachbody Programs? Shakeology?

A:YES!  When you purchase a challenge pack you can have your coaching fee waived.  Coaches receive a 25% discount on future purchases of the all programs and Shakeology

A:If you purchase the P90X3 or T25 challenge pack before the end of January you can buy it at the promo price of $180 (includes discount shipping and shakeology)

WOOOWEEEE!!  I did it, I completed my first ever full marathon! 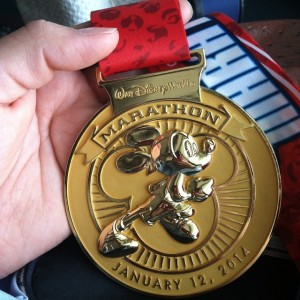 It was such an amazing, torturous, and inspiring experience and I am proud to say that I am an official marathoner.  BUT, I wish (I know, I know, I’m ridiculous) I would have pushed myself a bit harder to get closer to my goal finish time of 5:30:00.

My friend and husband rolled their eyes at me when I told them that I was disappointed in my time of 6:30:10.  How on earth could I be disappointed?  I just ‘ran’ a freaking marathon!!  After all, how many people can say they’ve completed a full marathon?!? Not too many.

Well, that’s just me, I am stubborn and tend to look at the negative of positive events (and I’m my own worse critic).  This doesn’t mean I am discouraged or despondent, only slightly disappointed.

I am okay with the minor disappointment because it’s motivating me to push on and do better on the next one.  Yes, I said next one.  I definitely want to run another marathon and I want to kick this one’s ass. I may even be crazy enough to try out the Dopey Challenge in 2015, but that’s dependent on what our future baby making plans are.  Anyway, let’s get to the point of this post, the recaps! 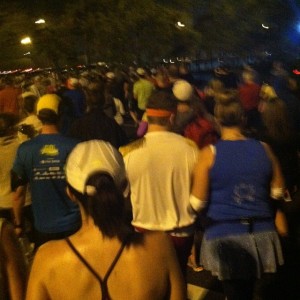 Race day started super early.  Buses to Epcot began pickup at 3 AM and we were up and at it by 2:45 AM.  I wanted to make sure I got there early enough to be at the start of my corral.  The first corral left the start at 5:30am, I was in corral O and didn’t start until 6:30am.  I think this part is what threw me off.  I hadn’t planned for such a long wait (silly me, I didn’t think to do my research) and my measly breakfast that consisted of a tiny Clif bar was likely burned up from the long walk to the corrals.

In the hours leading up to the race I nibbled on some Clif shot bloks to keep me energized.  My friend had left me at this point to go to a later corral so I was on my own.  To pass the time I chatted it up with a few fellow runners who were also doing their first marathons.  It was fun to talk about the stories that lead us to the start line.  Most of us never thought we’d be crazy enough to attempt such distances.  It wasn’t too long ago that 5k’s seemed like arduous tasks.

Talking to these ladies really helped to calm my nerves.  We were all here with the #1 goal being to finish.  Meeting a goal time would be the bonus or icing on the really big cake that is a marathon.

Despite trying to keep my mind off the task at hand, the fireworks at the gun of each corral’s start really built up the anxiety.  I WAS NERVOUS!  Like any big event that you spend months planning for you can’t help but think about the outcome.  Hell, the night before I had a nightmare that for some reason I didn’t make it to the race in time and was disqualified.  Not the best way to start out your first marathon.

Soon enough we were moving to the start and before I knew it we were off.

I stuck to my game plan of pacing myself based on my HR and kept it in the zone of 155-165.  This worked out fairly well for the first 10 miles, but then the sun came out and despite the temperatures being in the comfortable 60’s it was a shock to my system (I had been running in sub-freezing temps the week prior).

At mile 5 my pace was 13:18 with an estimated finish of 5:48:22.  I felt good at this pace and confident that I was going easy enough that I would be able to see negative splits towards the end of the race.  But as each chunk of 5 miles passed I slowed down, by mile 10 my pace dropped to 13:41, and by mile 13 to 14:06.  I was a little disheartened.  Even my last long run, which went horribly wasn’t this bad.  I couldn’t quite figure out what was going on.

Since the start I felt like I had the urgency to pee and my stomach was a bit uneasy so I tried to stop a few times for bathroom breaks. It wasn’t until mile 16 that I actually found a line short enough to wait it out.  Peeing for the first time was AMAZING.  I had been sucking down liquids like a fish and my bladder was in desperate need of being emptied. I felt a little better after this, but the 5 minute break from running tired me out.

My muscles and feet ached more than they had before I stopped and I just knew this would mean I would need to take intermittent walk breaks through the remaining 10 miles.  I was right, by mile 20 my pace dropped to 14:40, but I felt like I had it in me to finish strong.  Then I had to pee AGAIN and I tried to poop AGAIN without any luck (yes, I said poop–we all do it!).  I was not feeling the greatest at this point, but with 6 miles left to go the end was in sight and I was confident I could make it through.

And, then came mile 23–in perfect timing, my urgency to go to the bathroom finally reached it’s limit and I was ready.  Lucky for me there was a restroom right past the mile marker.  I was FINALLY able to relieve myself of the pain I’d been harboring since mile 5 and I was lucky enough that it didn’t happen mid-run.  How horrific would that have been?!

With 3 miles left to go, I started an inner dialogue, “You can do this, run the rest, you don’t need to take walk breaks for a measly 3 miles!”.

The last part of race was such a blur, I was so ready to be finished at this point and I didn’t care what my time was as long as I was at or under 6:30.  I didn’t want to go more than an hour over my goal finish and had set this as a last-minute goal.  If I could break that time, I would be happy.

Let me tell you something, when you have been running for 23 miles, those last miles are the longest freaking miles known to man!  I never felt like a mile was so long in my entire life.  Well, that was until the last 0.2 miles of the race!  Once I hit mile 26 I figured it would be cake, but nope, those last 0.2 miles could have been another mile.  It felt like I was moving at a snail’s pace, but I ‘sprinted’ to the finish.

I threw my hands up and smiled big as I crossed the finish (hoping someone was there to capture it–they weren’t).  I had just finished my first marathon and was thrilled (and exhausted)! 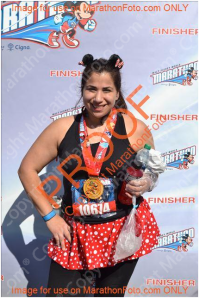 All in all, I feel proud and accomplished.  I finished my first marathon and didn’t place dead last OR get swept.  Admittedly, I was (and still am) disappointed with my finish time, but that’s only because I expected to do better based on my training runs.  There are a few things I learned from my first marathon and I’ll be sure to put my knowledge to use for future races.  In the meantime, I’ll wear my medal proudly and gloat until people get tired of hearing “I ran a marathon”.

With 9 days to go until my first ever marathon I can’t help but think about goals and how awesome it feels to accomplish them.  Last year I set a HUGE goal to run a marathon and began training in July of 2013.

Today, I’m just 9 days away from completing that goal.   I am nervous.  I am excited.  I am READY.  I’ve spent the past 6 months training for ONE race.  The race.  Hell, I have butterflies in my stomach as I type this post.  I can’t believe the time is almost here.  In just nine days (God willing), I will be able to wear my medal proudly and shout “I did it!  I ran a freaking marathon!”

This will be my first accomplished Fit Goal of 2014!  It’s not my only goal though, I have many more and honestly believe that with hard work and dedication I will accomplish each and every one of them.

There you have it!   I’m so ready to bust through these goals!  What are your fit goals for 2014?  Are you setting big goals or small goals?